Rabasco puts it all together 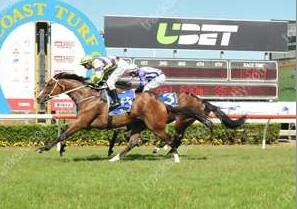 Promising stayer Rabasco recorded a nice win on his home track last weekend by taking out the Class 4 Handicap over 1800m.

Ridden by local jockey Scott Galloway, the four year old settled back second last in run and travelled well as the leader ran along at a solid tempo.  He pulled out into the clear at the top of the straight and finished off strongly to run down eventual runner up Torbay.

It was win number four for Rabasco, who only now is starting to figure out what racing is all about.  After several gear changes and trying to teach him to to settle in his races, trainer Bruce Hill made the decision last month to remove both the pacifiers and blinkers and the move has paid off, as the gelding is settling well and hitting the line hard.

This Saturday Rabasco will take the step up Metropolitan grade, as he heads to Doomben for the Benchmark 75 Handicap over 2200m.