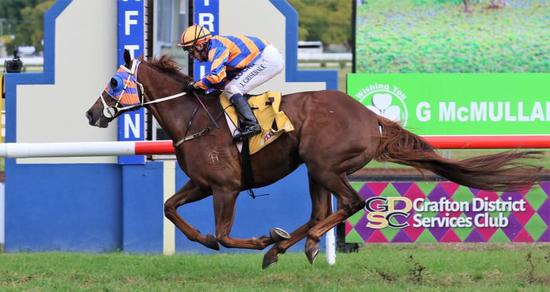 Bodega Negra returned to the winner's stall over the weekend and added another trophy to the cabinet, after taking out the 2019 South Grafton Cup.

As one of the longest serving members of the Bruce Hill Racing team, the rising nine year old has been in the stable for more than most of our staff but age certainly hasn't slowed him down.

The team headed to Grafton on Sunday with a handful of runners and were hopeful of a forward showing from him but their confidence grew as the rain came after running of the first race.  A noted wet tracker, Bodega Negra has headed to the races ten times over the past eighteen months without actually racing, as his search for wet tracks has too often ended in the abandonment of race meetings.

It rained just enough for him on Sunday and under the guidance of jockey, Jon Grisedale the old boy relished the heavy conditions.  He jumped away well from the wide gate and took up the lead and never looked like getting beat.  He pulled away over the final furlong to score by four lengths, his biggest winning margin to date.

As a rising nine year old, the subject of retirement has been bought up a few times over the past twelve months but each time it get mentioned he bounces back and shows that he's not ready to finish up.  Purchased as a yearling by trainer Bruce Hill for just $46,000, the son of Hidden Dragon has now recorded ten wins and has amassed over $530,000 for his connections.