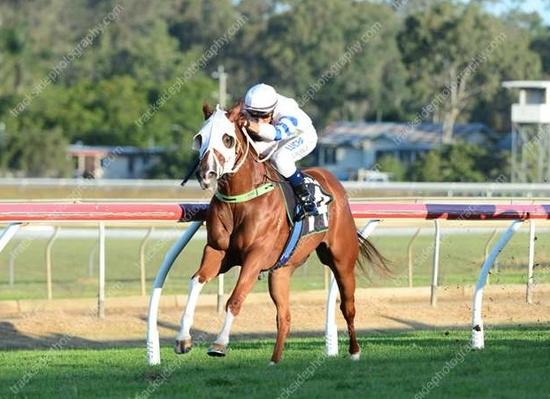 To say five year old gelding, Engraved has been frustrating, would be a huge understatement.

A son of Rothesay, Engraved has shown good ability since his very first gallop, unfortunately he rarely shows it on raceday but after an impressive win at Ipswich on Sunday, trainer Bruce Hill is hoping he has turned the corner.

In his first five career starts he started favourite but couldn't break though.  At his eleventh start he finally found the winning post first and did it with ease at Doomben.  After another run of disappointing performances he was almost headed for the sale ring but knowing what he was capable of, Bruce decided to give him one last chance and thankfully he was proved right.

Starting at odds of $43, Engraved jumped away well but found himself trapped wide.  Apprentice Jed Hodge didn't panic and urged him forward and the flashy gelding kicked strongly and was able to hold out his rivals and score but just over a length.  The win was a huge thrill for Bruce and his owner Nev Morgan, who has showed great patience and faith.  Hopefully now the talented gelding can repay them and put a few more wins on the board.

The win brought up a double for the stable, with Big Arjay saluting early in the day.