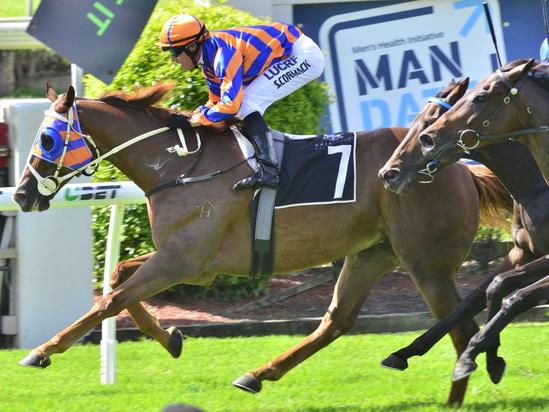 Bodega Negra returned to the winner's stall on Saturday and defied talk of retirement, by taking out the Mandate Open Handicap over 1630m at Doomben.

The seven year old was having his seventy-first race start, his thirteenth this preparation and despite not having finished in the placings this time in, trainer Bruce Hill was confident.  'He's just been looking for a wet track', Hill stated.  'Since August, he has been at the races four times, waiting his turn, when they have been called off and once we were on the float half way to Lismore when they rang and said they were off'.  'We've had to be very patient and thankfully everything came together today'.

Carrying just 54kgs in the soft going and with the inside draw, Bodega Negra looked to have plenty in his favour.  He was given a copybook ride by jockey, Sean Cormack, who was having his first ride for the stable.  Cormack took over from regular rider Paul Hammersley, who had surgery earlier in the week and was unable to take the ride at the low weight.  After jumping well, Cormack allowed the gelding to settle into the box seat and despite being crowded going into the first turn, he was able to get him to relax and he travelled beautifully.  On straightening, he peeled off the leader's heels and kicked strongly to score by three quarters of a length.

The win took his total prizemoney earnings to just over $480,000.  A son of Hidden Dragon, Bodega Negra was purchased as a yearling at the Magic Millions QTIS sale by Bruce Hill, for just $45,000.