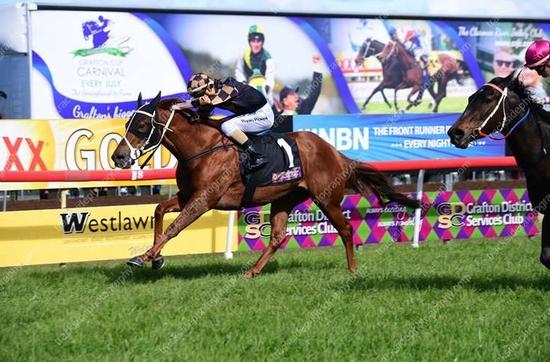 After a string of placings, Dubawi Sniper scored a well deserved win at Grafton last week, by taking out the Big Maiden on Ramornie Day.

Since joining the Hill stable in late April, Dubawi Sniper had collected cheques at each of his runs and looked to be improving with every start.  The little speedster was on a quick back up after finishing third on the same track three days prior and he seemed to relish it.

Ridden by Ryan Plumb, the three year old jumped away nicely in the 1000m event and he travelled well in the box seat.  When asked for an effort from Plumb, he let down strongly in the straight to cruise past the leaders and score by a long neck, setting a new class record of 56:77 in the process.

Although it was only a Maiden race, it carried a winner's purse of $16,800 and as the Snippetson gelding was also eligible for the BOBS bonus, he collected just under $22,000 for his connections.