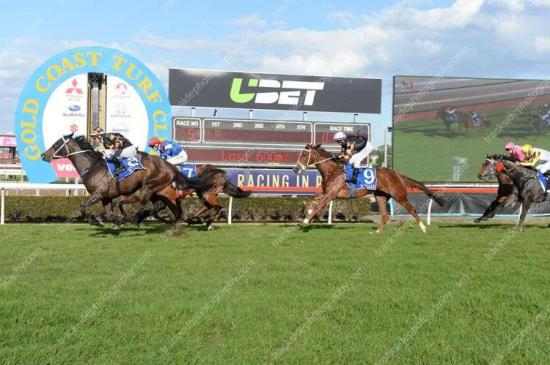 Lilly The Filly showed an incredible turn of foot on Sunday, to come from last to run down the leaders and take out the Class 3 Plate over 900m on her home track.

Ridden by James Orman, Lilly The Filly, now a five year old mare, couldn't muster any speed out the barriers and trailled the field for the majority of the event.  She was eight lengths off the leaders at the 600m mark and still had the field in front of her at the 200m, before she balanced up and scorched down the outide to win by three quarters of a length.

Lilly The Filly joined the Bruce Hill stable earlier this year and was yet to win a race in seventeen starts.  Since coming to Queensland she has had eight starts for two wins and two very narrow seconds.

She will take the step up to metropolitan grade on Saturday, when she starts in the Fillies and Mares Benchmark 75 over 1050m at Doomben.