Rosenet returns with a win 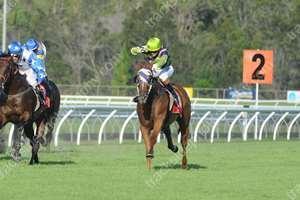 After almost twelve months away from the racetrack, Rosenet returned to the winners stall with an impressive win in the Class 3 Plate at the Sunshine Coast last month.

Ridden by Bridget Grylls, Rosenet was slow to begin and settled at the rear of the field.  Grylls bought her to the outside in the straight and she stormed home to win by the barest of margins.

Now a four year old, Rosenet hadn't raced since April last year as she required a throat operation and was given the necessary time to recover.  The Hussonet mare remains unbeaten first up having won three from three.