Choice We Had breaks through 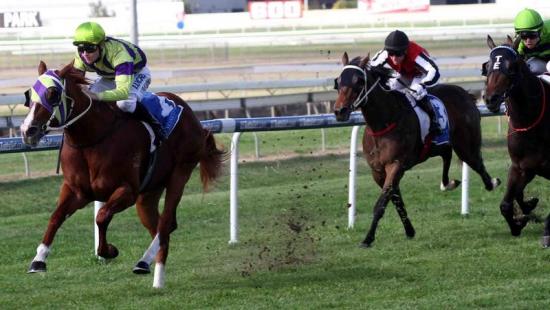 The addition of blinkers and a step up in distance, saw promising youngster Choice We Had record his maiden win, in Wednesday's three year old Handicap over 1350m at Doomben.

He jumped away nicely from barrier one and apprentice Matthew McGuren allowed the colt to roll along in front at a leisurely pace, as there was no pressure from any other runner.  He kicked clear on straightening and held of the fast finishing Life at Sea to score comfortably, by a length.

After finishing a solid third over 1200m at his previous start, Choice We Had seemed to appreciate the extra distance and the blinkers kept his mind on the job, as he had raced a bit raw in his two prior runs.

The Choisir colt was purchased by trainer Bruce Hill at the Magic Millions sale in January last year for the bargain price of $20,000 and has now collected just over $13,000 in three starts.