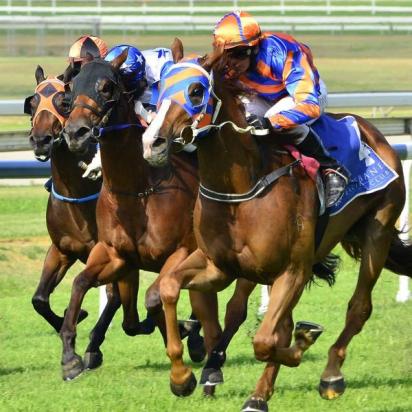 A trip to Sydney and a bit of extra race experience has worked wonders for talented youngster Bodega Negra who recorded his second win on Saturday, taking out the Iona College Old Boys Handicap at Doomben by one and a half lengths.

The three year old settled in a midfeild position and travelled beautifully throughout the run. Jockey Kelvin Wharton pulled him to the outside on the turn and he never looked in doubt, scoring easily over runner up Hoptgarten with race favourite Miss Sunset a further length away in third placing.

Bodega Negra has always shown potential and for trainer Bruce Hill it was just a matter of getting him to do everything right.  At his third start he all but had the race won in the straight but seemed to get lost, running in and throwing the race away.

Hill took him to Sydney a fortnight later where he competed in the Group Two Stan Fox Stakes and despite not finishing in the first five he has benefited greatly from the experience.

Saturday's win was only the fifth race start for the son of Hidden Dragon and it took his earnings to $124,500.