Teronado bounces back for Doomben victory 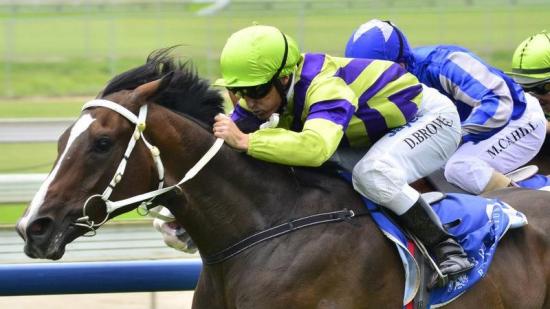 Gold Coast trainer Bruce Hill will send promising two-year-old Teronado for a spell despite the colt’s outstanding win in the Eagers Mazda Handicap (1350m) at Doomben.

Teronado bolted in on good ground on debut at the Sunshine Coast before a bottomless track brought about the youngster’s downfall at his second start at the same venue but slightly better ground enabled him to return to winning form.

The son of Testa Rossa underlined his immaturity by again beginning slowly before racing at the back of the field during the early and middle stages for jockey Damian Browne.

Browne eased Teronado to the outside to circle his rivals from the 500 metres with the juvenile making ground rounding the home turn.

Teronado let down powerfully on the slow track to end the race as a contest with 100 metres to run before the bright prospect coasted to the line clear of his opposition, stamping himself as a genuine candidate for stakes success in the coming seasons.

Hill had the same opinion of Teronado but said he would give him all the time he needs to develop, which may include missing the upcoming Brisbane winter carnival.

"He is very immature and I don't want to rush him,'' the trainer said. "What he has been doing at the moment is on raw ability.

"You don't get good horses every day and you have to look after them.

"I can hardly wait to see him on a dry track. There is no doubt he is better on top of the track.''

Hill paid what now appears to be the bargain price of $45,000 for Teronado at the 2012 Gold Coast Magic Millions Yearling Sale. The emerging talent took his earnings to $48,500 with his Eagle Farm victory.