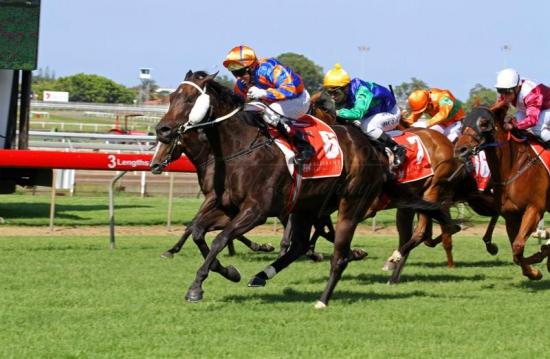 Hill bought the three-year-old at the 2011 Magic Millions QTIS600 Yearling Sale. Caliente had won only once in six starts before her Mode Plate victory but had little luck in three stakes races during the winter.

"To be fair to her she got decked a few times in her races last time in and she didn't have the smarts to cope with it," Hill said.

"But this time in she's developed mentally the way I was hoping she would."

Caliente indicated she had improved during her spring spell with a pair of trial wins before her first-up victory, which came in outstanding fashion.

Group 1-winning rider Paul Hammersley settled Caliente at the tail of the field early in the $100,000 feature. The daughter of Lyndhurst Stud stallion Sequalo still had only two runners behind her with 400 metres to travel.

Caliente unleashed a terrific sprint to run over the top of the pacesetters to record what turned out to be a soft 1-1/4-length win to become the 17th individual stakes winner for the stallion.

Caliente’s amazing finish gave Hill plenty to consider. The trainer would not immediately declare Caliente a certain runner in next month’s Magic Millions 3YO Guineas (1400m) on her home track, preferring to assess her condition before deciding her path.

"I'll see how she pulls up before I work out where she has her next start," Hill said. "There are a few options we can take but we'll just see what happens."

"I think she'll get a mile easily enough and I think she can keep taking the necessary steps.”

Caliente earned a $64,000 winner’s cheque for her brilliant win, taking her earnings to more than $137,000 from seven starts.