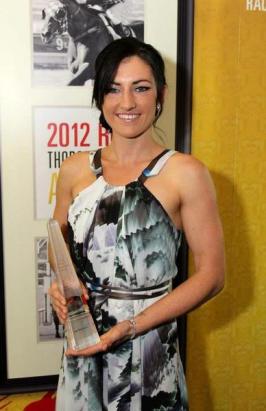 The team at Bruce Hill Racing would like to congratulate our hard working apprentice Tegan Harrison on her fantastic season.

On Saturday night she was named the SEQ Provincial Apprentice of the year, finishing the season with 64 provincial wins, 24 ahead of runner up Anthony Allen.

With 29 1/2 of those winners recorded on her home track she was also awarded the Gold Coast Apprentice Premiership and made history by becoming the first female to do so.

Tegan rode more winners in the 2011 - 2012 season than any other apprentice in Australia, which is a magnificent achievement and she is quickly making a name for herself in the Metropolitan ranks with 16 winners under her belt already.