Balkuin goes back to back 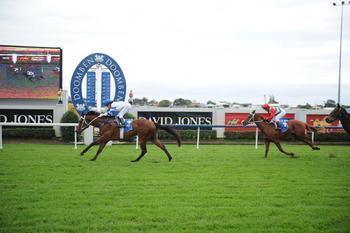 Promising galloper Balkuin made it two from two for his new stable after recording his Maiden win at Doomben at the end of July and then taking the step up to Class 1 at the Gold Coast earlier this month.

The Bradbury's Luck gelding joined the Hill stable in June having only had the one race start late last year.

He won his maiden in impressive style, jumping from barrier 9 in the field of 10 he was urged forward by Tegan Harrison and lead all the way to win the 1200m event by 3 lengths.

A fortnight later the four year old recorded his second victory by again scoring an all the way win, this time by just under a length at the Gold Coast in the Carlton Draught Class 1 Handicap.

Bruce Hill is thrilled with the way Balkuin is coming along and will now look to step him up "He looks to be a very handy horse on the way up, I think the next step for him will be a Saturday metropolitan race" he stated.