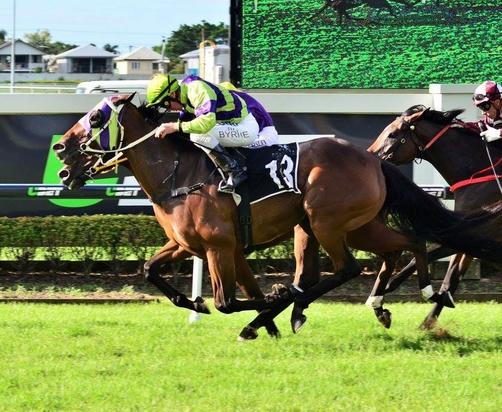 Handy mare Kalandula returned to the winner's stall last weekend, taking out the Benchmark 75 Handicap, over 1615m at Doomben.

The win was a welcome record for connections who thought the mare's best days may have been behind her.  Having not won since August 2015, Kalandula had been plagued by unsuitable tracks and bad barriers this preparation, but with a bit of luck in her most recent runs, she has shown glimpses of her old form and she produced a terrific effort at her last start to finish runner up in the Gold Coast Stakes.

Trainer Bruce Hill was confident of a forward showing in last week's race and she didn't let him down.  Given a copybook ride by Jim Byrne, Kalandula settled back in the field and when he asked her go, she dug deep and let down strongly in the straight to grab Slydini in the shadows of the post and score by a nose.

A rising seven year old, Kalandula will go through the Magic Millions broodmare sale in June.  A daughter of the ill-fated Commands, she has now won eight races and has picked up over $242,000 in prizemoney.