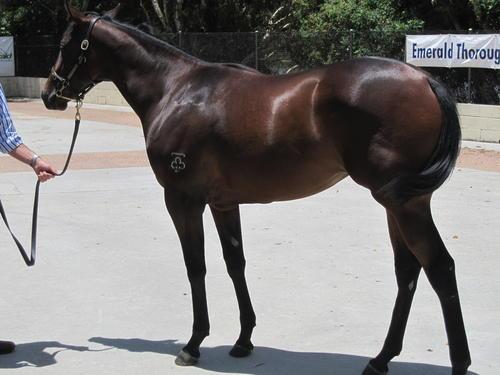 Bruce walked a straight path to stall QD 21 where a three-quarter sister in blood to Calchris was passed in short of  $100,000 at the Gold Coast Magic Millions sale recently.

And it's little wonder he took the trek.
Bruce inspected the Oratorio (IRE)-Miss Chakra filly a few days earlier and liked what he had seen. (Oratorio (IRE) was the Irish star trained by Aidan O'Brien not the former Melbourne sprinter).
"She is a very nice athletic filly, not too big or small, very well balanced," Bruce said.
"She is a better type than Calchris was at the same age."
"She has broken in well, she has had two jumps out that have been fvery good, I could not be any happier with her."
Calchris (by Commands) was the mare Bruce guided to black-type victory and over $200,000 in prizemoney just a few seasons back.
And with the brilliant start to Oratorio's (IRE) stud career at Coolmore in Ireland, Bruce believes this filly could be better.
"Calchris was a fantastic mare whose record should have been better but for poor barriers in some big races," Bruce said.
Both Oratorio (IRE) and Commands are by nine-time Australian champion sire Danehill but this filly's superb breeding goes much deeper.
Miss Chakra's dam line incorporates one of the best nicks in the 1980s and 90s, that being the Sir Tristram - Sovereign Edition cross.
"I don't need to be told how good that was," Bruce said.
When foreman for legendary Victorian trainer Geoff Murphy, Bruce saddled up Gurner's Lane to win both the Melbourne and Caulfield Cup.
He also saddled up his brother, Soveriegn Red a six time Gr1 winner..
Both these stars had the Sir Tristram - Soveriegn Edition cross as did black type winners of that era Empire Rose, Trichelle, Tri Belle, Tristram Edition, Confiscate, Khamacruz, Glastonbury, Power Of Destiny, Mint Master, Palace News, Queen's Choice and Never Quit - the latter being part of the Calchris family.
Miss Chakra is by four-time Australian champion broodmare sire Marscay whose daughters have produce a seemingly endless amount of quality including Defier, Elvstroem, Haradasun, La Baraka, Zazzman, Iglesia, Scenic Peak, Yippyio, Camarena etc.
"Calchris was a late two-year-old and improved from there," Bruce said.
"I tend to think this filly may follow suit but you never know, she may come earlier."
Another of Miss Chakra's progeny making a mark is Flying Cat.
The gelding is one of Malaysia's most promising three-year-old's after just two runs, having impressively won on debut recently.
Oratorio (IRE) produced GR1 Newmarket 2YO Dewhurst quinella Beethoven and Fencing Master in 2008.
The previous sire to produce the prestige quinella was the great Sadler's Wells.
The duo were part of Oratorio's (IRE) first crop which included many other winners such as Miracle Match, Soul Heaven, Blue Angel, Aerodynamic, Audrinna, Borghese, Gallery etc.
In New Zealand, Banchee has established herself as that countries best two year old last season.
It flew home for a fantastic third in the Karaka MM after settling last from the widest barrier.
She won her next two including the Group 2 Breeders Stakes and on Saturday March 13 the Group 1 Diamond Stakes.

Oratorio (IRE) himself was a dual 3yo Gr.1 winner of the Eclipse and Irish Champion Stakes emulating Champion sires Sadler’s Wells and Giant’s Causeway. As a 2yo, Oratorio won the Gr.1 Prix Jean-Luc Lagardere in France where he was named champion 2yo in 2004..

There is 20% of this filly still to be sold.
Shares can be bought at purchasers want.
For a live inspection ring Bruce on 0410 490 150.
The filly can be found if you google - sire cam and go to video search - Gold Coast Magic Millions sale - lot 402

MISS CHAKRA, by Marscay. Unplaced. This is her fourth living foal. Her third foal is an unraced 3yo. Dam of three foals to race, all winners-