Stakes win for Man Of His Word 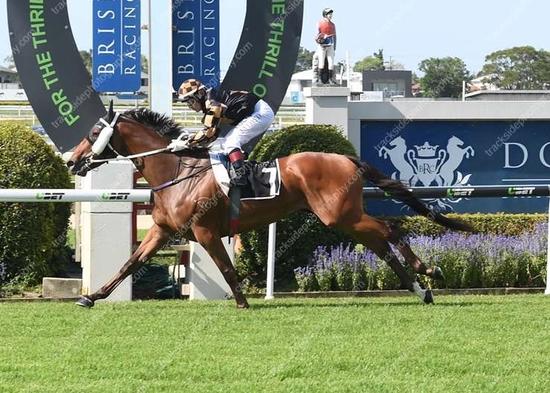 Talented galloper Man Of His Word, produced a brilliant performance at Doomben yesterday to record his first black type victory.

Earlier in the week, trainer Bruce Hill and the Grand Syndicates team were tossing up whether to take him to Sydney for the Villiers Stakes or to stay in Queensland and start him in the Listed Brisbane Handicap.  They decided upon the latter and the son of Lope De Vega delivered, showing an incredible turn of foot to take out the 1600m feature.

The four year old has always shown plenty of natural ability but he has been a work in progress, as he has taken his time to figure out what racing is all about.  Despite coming off the back of a dominating win a fortnight earlier, Man Of His Word was taking a big step up in class in yesterday's event but Hill was confident he could take it out, as long as he did everything right and that he did.  He settled back at the rear of the field as they set a solid tempo and he had the whole field in front of him as they turned into the straight.  At the 200m mark he still the job ahead but with 100m to go he hit top gear and sprinted past his rivals to score by two lengths.

The win provided Grand Syndicates with their first stakes victory and with over $250k in prizemoney earnings, Man Of His Word has well and truly paid back his $10,000 purchase price.