Amajill shows she's not done yet 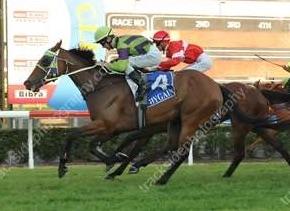 It was approaching a year since she had last returned to the winner's stall, but gutsy mare Amajill, was back to her best last week, scoring a solid win in the Ratings 0-62 Handicap over 1400m on her home track.

The five year old mare had been out of form early in her preparation, and there was talk of retirement if she didn't improve.  A few simple changes by trainer, Bruce Hill, to try and get her enthused about racing again seemed to do the trick and she recorded two nice placings before saluting.

The win was a big thrill for her loyal owners and as a $4000 yearling purchase, she has certainly given them a great ride.  She has now won four races, as well as recording seventeen placings and has collected over $85,000.