Media Maid goes back to back 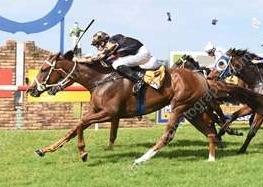 Popular mare, Media Maid, made it back to back wins earlier this month, saluting at Ballina in the Benchmark 60 Handicap over 1005m.

Despite an awkward alley and the 60kg impost, the five year old mare proved too strong for the rest of the field when she stormed down the outside to nose out eventual runner up, With A Promise.

It was win number six for Media Maid and her third this preparation.  Raced by the Grand Syndicates team, Media Maid was purchased from the Magic Milions QTIS sale as a yearling for just $8,000 and has she now collected over $84,000 in prizemoney.