Bodega Negra and Taillevent bring up a double 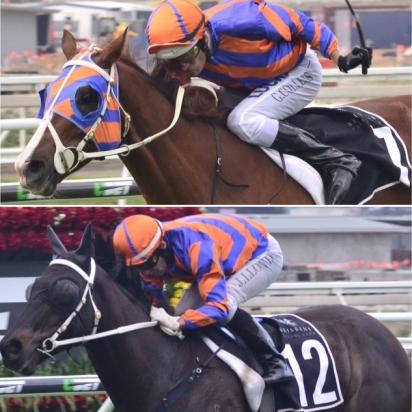 The Bruce Hill stable made a good start to the new racing season, when Bodega Negra and Taillevent combined to make it a double at Eagle Farm last month.

Now a six year old, Bodega Negra was yet to win this preparation but had been working well at home and was just waiting to strike a soft track.  He had conditions to suit and under the guidance of jockey Glen Colless, he took out the Open mile by half a length, with stable mate Teronado a further neck away in third place.

Later that day, talented four year old Taillevent broke through for his first Saturday win.  It was a well deserved victory after a string of placings and only going down by the barest of margins at his previous start.  Ridden by Jeffrey Lloyd, Taillevent raced wide the entire trip but relaxed beautifully during the run and let down strongly in the straight to score by one and a half lengths.

It was a fantastic day for owners Michael Buys and Robert Willis, who not only race both Bodega Negra and Taillevent but bred Taillevent.