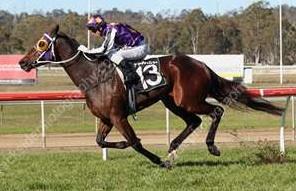 3yo Bernadini Gelding, Davor, devoured his rivals over 1680m at Ipswich on Friday, to break through for his maiden win.  Settling in the back half of the field, he made a well-timed run from the 600m mark to score by 1.5 lengths.  Previously trained and owned in Sydney, Davor has always been thereabouts in his runs since moving north to Queensland.  Expectations from both the run and his breeding will see him over more ground in the future, possibly at the upcoming Grafton Carnival.

Later in the day stablemate Toronto Flyer, finished a nice third when jumping and being left alone in front. He was then taken on from the half mile and fought on really well, only missing second by a half a head.