Emvepee gets a win on the board 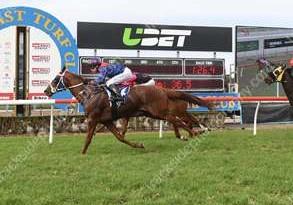 Promising colt Emvepee returned to the winners stall for the first time on Sunday, after a solid victory in the QTIS three year old Maiden Plate on his home track.

The three year old has always shown plenty of ability but until Sunday he'd been unable to break through for a win.  Having his ninth start, Emvepee settled just worse than midfield but enjoyed a nice uninterrupted run throughout the 1400m event.  He let down nicely in the straight, without be placed under a lot of pressure, to score by half a length.

Emvepee collected $17,600 for the win, thanks to the QTIS bonus.  He will now more than likely head to Grafton for his next run, where he is also eligible for the BOBS bonus on offer.